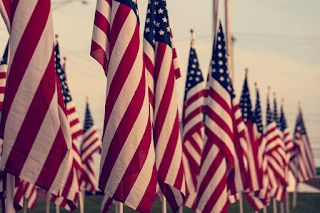 Reading personal stories, blogs, articles, books, interests me. I thought I would share an excerpt from John McCain's book 'Faith of my Fathers' on this Veterans Day. Whenever I hear his name I remember this moving account of his time as a prisoner of war in a camp known as the Hanoi Hilton~

"One of the men who moved into my (POW) room was a young man named Mike Christian. ... Mike got himself a bamboo needle. Over a period of a couple of months, he created an American flag and sewed on the inside of his shirt.

"Every afternoon, before we had a bowl of soup, we would hang Mike's shirt on the wall of the cell and say the Pledge of Allegiance.

"One day the Vietnamese searched our cell, as they did periodically, and discovered Mike's shirt with the flag sewn inside, and removed it.

"The cell in which we lived had a concrete slab in the middle on which we slept. Four naked light bulbs hung in each corner of the room.

"As I said, we tried to clean up Mike as well as we could. After the excitement died down, I looked in the corner of the room, and sitting there beneath that dim light bulb with a piece of red cloth, another shirt and his bamboo needle, was my friend, Mike Christian. He was sitting there with his eyes almost shut from the beating he had received, making another American flag. He was not making the flag because it made Mike Christian feel better. He was making that flag because he knew how important it was to us to be able to pledge our allegiance to our flag and country."

To me this story is about human spirit, unity when it really counts, loyalty, bravery, and of course, love. Love of country and our fellow man.

To all our Veterans, past and present, thank you. Today we honor you.


Food holds so many memories for me. The aroma of my mom's soups, the rituals of preparing holiday meals, fresh baked cookies. Sometimes the nostalgia overtakes me. That is exactly what happens when we make things like Grandma Stewart's Persimmon Cookies.

Hachiya or Fuyu, I adore persimmons. Every year, around this time, Rick's grandma would make theee most divine cookies with this fruit. Chewy, spicy, sweet, frosted goodness. Today everyone in the family (4 generations) makes Grandma's persimmon cookies in the Fall. Then. We continue to make them until our waistbands insist we stop. Only Hachiya are used for this recipe but a few years ago I had a salad made with Fuyus and became a huge fan of these as well.
Fuyus are kind of flat, good when they're a bit crisp. Sliced very thin on my favorite salad mix of Arugula, Spinach, diced red onion all tossed in a small amount of Maries Poppy Seed Dressing. Trust me, DEEElish. Fuyus are also yummy to just munch on AND both are an excellent source of fiber, Vitamin A and C, Vitamin B6, potassium and manganese.
Hachiya Persimmons are longer and slightly pointed at the end. Loaded with pucker power if you should try to eat them raw and not too ripe. They should feel about like a water balloon before you use them. The easiest way to accomplish this is the way Grandma always did. Choose the beautiful apricot colored fruit, firm or not, toss them in the freezer. When you thaw the fruit it will have that water balloon consistency, just scoop out the pulp and throw away the skin. If you wanna try Grandma Stewart's recipe, here it is~This is a month to remember all I have and have had throughout my life to be grateful for. The list is long. The other day some song came on the radio, maybe it was 'great day to be alive' or something like that, Rick asked if I feel that way, I told him at least once every single day. I am surely blessed.