We can title this article ‘A Day Late and A Dollar Short’ since the Blood Drive has already passed. BUT, being the eternal optimist, I prefer to call it SuPeR early for the April Blood Drive.

Now that we’ve cleared that up, here is your chance to be a real Hometown Hero! I’m embarrassed to say this was my first time giving blood. Recently I heard there is a critical need for blood so when the United Blood flyer went up it was a great opportunity. On the flyer was a website to sign up and schedule my appointment. Super simple. Literally 2 minutes.  Then I called the phone number and spoke with Renee, she was terrific and excited to get a shout out in our ad. 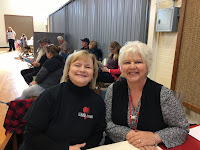 I took a couple of quick photos in the parking lot, loving all the Find the Hero in You branding! These wonderful women met me at the door, Mavrey and Lisa, explained the procedure. What’s this? Great tunes playing? A snack table filled with goodies? The atmosphere is super relaxed and every single person was so kind. Plus they insist you eat some yummy snacks before you leave! 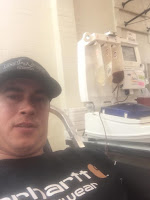 "I give what's called a double red cell donation, it's where they take two units of red cells and return the plasma back to me, as opposed to only taking one unit and keeping the plasma and the red cells. I am o positive which makes me a perfect candidate for it. I've been giving blood ever since I was in high school. There was a young man that needed a blood transfusion in my school and almost everyone that was eligible in school donated blood for him during the blood drive and I was hooked. :)
The double red cell donation normally takes an additional 30 to 45 minutes compared to the normal full blood donation. I arrived at the LDS church with an appointment at 12:30 and left the building at approximately 2:20. There were so many people there, it was awesome. They were running about 45 minutes behind because of all the people that showed up. Appointments did not matter on Tuesday. LOL. But like I said it didn't matter because we were all out there saving lives!"

Yeah. My community rocks like that. If there’s a need we will overwhelm you with support. I love it here!

Hometown Heroes. We got ‘em.