In May of 1968 this market opened as Eagle Thrifty. Since then it has been, Raleys, Shop ’n Save, Susan Village Market and best of all, Susanville Supermarket! Located right in the heart of town, wisely chosen location. But let’s face it. Brick and mortar (or in this case cement block) and a name don’t make a business. Our shoppers and the dedicated staff that take ownership are the heart of our store. As a side note, Ken Loflin was hired in 1968 before the doors even opened. 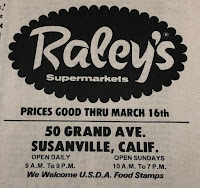 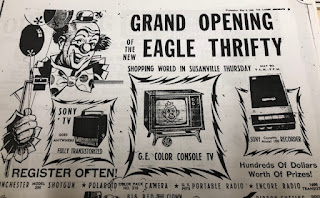 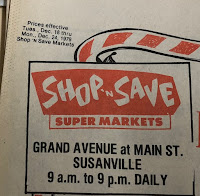 25 year anniversary
In 1993 we came to Susanville Supermarket and have been blessed to remain. I was just talking to a friend who’s career has moved her frequently to many exciting cities, she shared that while moving was exciting she missed having a sense of community like we have here after 25 years. Isn’t that the truth. I just heard the USDA Secretary speak and express his gratitude to independent grocers for being the last step in actually getting food to the people. We are proud to be part of such an awesome task. Thankfully, Ken Loflin was still here when we arrived.

Grand Opening!
As I’ve said before, the old girl really needed a facelift and boy did she get one! NEW Bakery/Deli Kitchen with their own walk in freezer and walk in cooler, new oven, which is about as big as a walk in freezer, new proof box, new bathrooms, energy efficient lighting, entry ways that no longer open right to traffic, covered cart area just to name a few, AND she is beautiful! PLUS we reclaimed our name, we’re still IGA but we belong to Susanville first and really believe our market is SUPER. Oh, and Kenny? He’s still here, and many others that have served our market for decades.


Special thanks:
Hannah Satica for her support since the beginning!
Holland and Corder,
LoCaL Historian Tim Purdy for the logos, he had original ads in his collection!
All our faithful customers,
Our dedicated staff,
and our whole community!